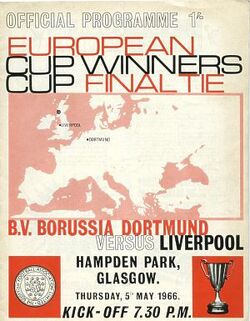 Liverpool lost the 1966 European Cup Winners Cup Final, having been defeated 2-1 by Borussia Dortmund of Germany after extra time. The match was played at Glasgow's Hampden Park. Liverpool qualified for the Cup Winners Cup after winning the 1965 FA Cup. Reaching the final of the tournament capped a successful season for the Reds, who also won the First Division title. Liverpool reached the final of the Cup Winners Cup after knocking out Juventus, Budapest Honved and Celtic in the so-called Battle of Britain in the preceding rounds. This was Liverpool's first ever European final.

Liverpool travelled to Glasgow with a squad of 13. Semi-final hero Geoff Strong was injured in the clash with Celtic, however confidence was high that Liverpool would follow up their recent league title with victory in the cup, despite it only being their second ever season in European competition. 20,000 people left the city of Liverpool to travel to Glasgow, causing all roads leaving the city to become jammed.

The weather conditions for the match were so poor that the 130,000-capacity Hampden Park was restricted to a crowd of just 41,000. Liverpudlians outnumbered the travelling Dortmund fans, however Dortmund garnered significant backing from local Scottish fans, after Liverpool had knocked out Celtic in the semi final.

The first half of the match was a fairly even affair, although both sides had opportunities to take the lead. Ian St. John had a shot cleared off the line, and Dortmund left back Theodor Redder almost put the ball in his own net, however Dortmund were only kept at bay themselves thanks to some goalkeeping heroics from Reds stopper, Tommy Lawrence. In the second half, Liverpool began to assert their dominance, particularly through the impressive Gordon Milne. However, against the run of play, Dortmund took the lead in the 62nd minute through Siegfried Held after a sweeping counter attack. Liverpool responded quickly, equalising after Peter Thompson beat three Dortmund players down the left flank before crossing for Roger Hunt to hammer a shot low into the net. The Dortmund players however had protested that Thompson had run the ball out of play before he crossed for Hunt. The goal was accompanied by a mass pitch invasion by the Liverpool fans. Liverpool pressed heavily for a winner, however in the closing stages of the game, Roger Hunt wasted a good opportunity to put the game to bed. He ran onto an Ian St. John pass that had put him clean through on goal, only for him to take too long to get his shot away and ultimately provided the German stopper with an easy save.

In extra time, Liverpool continued to assert their dominance and saw numerous shots narrowly miss the target. Dortmund however scored the winning goal from a route-one ball over the top from the German defence. Centre back Wolfgang Paul played a long ball over the Liverpool team to striker Siegfried Held, who went clean through on goal. Tommy Lawrence came rushing out of his net to pull off a last-ditch save, but the ball fell to Reinhard Libuda 40 yards from goal, who took a shot at the empty net. Reds captain Ron Yeats attempted to run back and clear the ball, however the ball struck the inside of the right post and then rebounded off the helpless Yeats.

Upset by Liverpool's loss despite long periods of dominance, Reds manager Bill Shankly gave this assessment of the match: "We were beaten by a team of frightened men. It was obviously their plan from the start simply to keep us in subjection. They had no real attacking plan but they won and I am quite sincere when I say they are the worst team we met in the competition this season. If Tommy Smith and Roger Hunt would have been fully fit we would have won easily. Smith injured an ankle six weeks ago and aggravated the injury early in the game. Hunt injured his ankle again midway through the first half."