The 1939-40 season was an unofficial season during World War II, and was Liverpool's 48th season of football since they were established. The outbreak of World War II saw the suspension of all professional football in September 1939; Liverpool had played just three games by this point and sat fourth place in the league.

An unofficial regional league system was put in place throughout the country, and Liverpool were placed in the Western Divison, along with Everton and Manchester United among others. Due to many players going off to take part in military service, Liverpool's depleted squad was suplemented by guest players. Notable players to continue playing this season include Arthur Riley, Berry Nieuwenhuys, Billy Liddell and Bob Paisley.

As the FA Cup had also been suspended, a replacement knockout competition - the War League Cup - was put in place. Liverpool were knocked out at the first hurdle by Barrow, who beat Liverpool 4-1 on aggregate over the two-legged tie. Liverpool were much more successful in the Western Divison, finishing just two points behind champions Stoke City. South African forward Berry Nieuwenhuys finished as top scorer in the season, scoring 18 goals in all competitons. No statistics attained during the war years were counted as official. 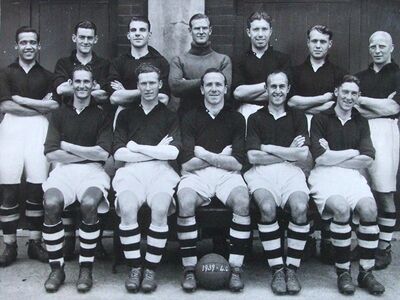 Note: Season was suspended after 3 games.

Retrieved from "https://liverpoolfc.fandom.com/wiki/1939-40_season?oldid=16673"
Community content is available under CC-BY-SA unless otherwise noted.