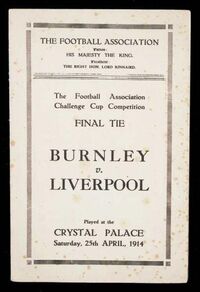 The 1914 FA Cup Final was the first major cup final that Liverpool participated in since their establishement 22 years prior in 1892. The match was played in front of a crowd of 72,778 at the Crystal Palace stadium- home of Crystal Palace F.C. in London- and was the last FA Cup Final staged at that venue, which had hosted every FA Cup Final since 1895. The match was also notable as being the first English Cup Final to be played in front of the monarchy, with King George V in attendance. Liverpool lost the match 1-0 to Burnley thanks to a goal from former Everton striker Bert Freeman.

With one game of the First Division season left to play, both Liverpool and Burnley were facing a bottom half finish in the League. Burnley had made the final having beaten all of their opponents along the way without the need of a replay, with the exception of their semi-final tie against Sheffield United. Liverpool on the other hand had required replays to progress past both their Round 1 opponents Barnsley, and Round 3 opponents West Ham.

Liverpool initially drew 1-1 with Barnsley before sealing their place in Round 2 with a 1-0 replay victory. They then dispatched Gillingham 2-0 before playing out another 1-1 draw, this time against West Ham in Round 3. Liverpool won the replay match 5-1 and progressed to the semi-finals following a 2-1 victory over QPR in Round 4. In the semi-final, Liverpool came up against a fellow First Division outfit for the first time in the competition in the shape of Aston Villa, who they beat 2-0. Bill Lacey had top-scored for Liverpool in the competition with five strikes, closely followed by Tom Miller with four. 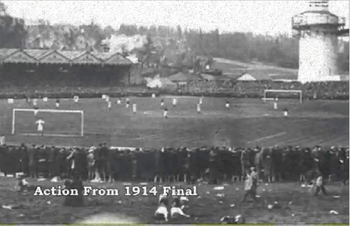 Liverpool- managed by Tom Watson- lined up with seven Scots in the team, three Englishmen- including captain Ephraim Longworth at full back, plus Irish outside forward Lacey. For the match, Liverpool were without key defender Harry Lowe. In the early stages of the contest, the gameplay lacked a cutting edge as the two teams both made a steady start in front of the very sizeable crowd. Burnley were the team showcasing the neater football, however Liverpool had an early opportunity to take the lead when Burnley defender David Taylor slipped to leave the Burnley goal undefended, however Liverpool failed to capitalise. Taylor attoned for his error soon after though when he blocked a goal-bound shot from Liverpool forward James Nicholl, with the ball striking Taylor in the face. Liverpool continued to press and were unlucky not to take the lead when a one-on-one situation with Burnley's goalkeeper Ronnie Sewell resulted in a shot going just wide of the goal.

Burnley hit back however and, whilst both teams tested their opponent's goalkeepers, it was Ken Campbell in the Liverpool goal who had the most work to do. As the first half ran down however, the best chance fell to Liverpool's Arthur Metcalf- but the Burnley defence stood their ground and denied Liverpool the opener. Burnley continued to look lively at the end of the half, especially on the flanks, however the pitch conditions were making it difficult for the forwards to adequately control the ball. The half-time whistle blew with the two sides fairly evenly matched and the game still goalless.

The second half began with neither side able to assert themselves as the dominant force in the match, however the pace of the game soon improved and both sides began carving out chances for themselves. The opening goal of the game shortly followed, coming on 57 minutes as a Burnley throw-in from the right found the Clarets' Billy Nesbitt. Nesbitt crossed for Teddy Hodgson who headed the ball on to Burnley's ex-Everton striker Bert Freeman, and Freeman's first-time shot found the far corner of Ken Campbell's net. The goal buoyed Burnley who immediately put Liverpool under great pressure, and were unlucky not to add to their tally when Dick Lindley's shot struck the corner of the post and crossbar. Eddie Mosscrop also went close to adding a second when his close range shot went narrowly over the crossbar.

As the game drew to it's conclusion, Liverpool came back into the game in search of an equaliser. On several occasions Liverpool launched long shots at Sewell's goal, however the Burnley 'keeper stood up well to the challenge. Liverpool were unable to find the goal they needed, and the game drew to a close with Burnley claiming the FA Cup with a 1-0 victory.